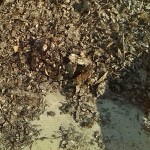 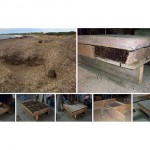 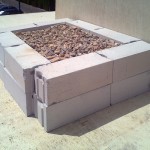 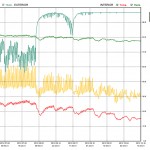 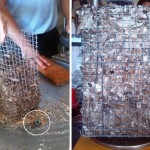 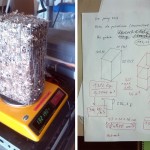 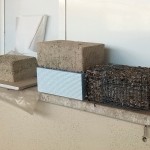 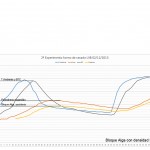 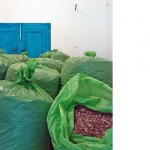 The common thermal insulations are minerals or derived from oil.

The insulation level depends on the content of air bubbles in the inside. Therefore, any local waste with a high content of air is a potential insulation.
In Formentera, the most abundant waste is Posidonia (Neptune grass).

TEST 1:
Performed in situ at the IBAVI offices, using 2 datalogger sensors type PCE- HT 71 and a full-scale mockup of wooden pallet with Posidonia filling.
It has been exposed to the elements for 120 days during July, August, September and October 2012. Two sensors are placed inside and outside, in order to obtain the difference in temperature and humidity.
The temperature variation within the model was 0.5°C between the day and night. Since the outside variation was 23°C, it indicates that the thermal diffusivity is excellent.

TEST 2:
Made on the premises of the UIB through a drying oven in which the temperature is raised up to 50°C.
Three samples of different materials but with the same size, 10x15x25cm, with a temperature sensor in the center, were introduced in:
1 – Block of expanded polystyrene (which is used as a reference, as it contains all the data: conductivity, density, specific heat, etc.).
2 – BTC.
3 – Posidonia Oceanica.
Temperature reduction of Posidonia is 35% higher than polystyrene.

TEST 3:
It’s in process, on the premises of the Balearic University (UIB) following the specifications of the UNE 8301: Measurements according to ISO 8301:1991.Thermal insulation — Determination of steady-state thermal resistance and related properties — Heat flow meter apparatus.